Today was my boxing club’s one year anniversary. We had an extra long boxing session followed by cake and other snacks, and awards. Much to my surprise, and to my incredible delight, I won an award! I received the “Best Transformation” award and could not have been prouder.

I rarely win awards. Sometimes I feel like I’m the kind of person who works really hard but rarely gets recognized by others. Being recognized at Title in a domain (working out) that I usually think I’m terrible at meant a lot. In high school, I was on the swim team for all four years. I was the worst member on the team for that entire time, spending all my days swimming in “Lane One.” I was also on the track team for four years, but my letter jacket never had “Track & Field” emblazoned on it, because you needed to win in a meet to get a letter.

I’ve been working hard at boxing. I went from doing no physical activity at all, to boxing twice a week, then three times a week, and now every other day. Personally, I do feel transformed. In the 6 months that I’ve been a member, I have lost 15 pounds, acquired real muscles (even abs!), and feel so much better about my body and myself.

But like in so many other areas of my life, I rarely dwell on my success. Instead of focusing on what I’ve accomplished, I instead focus on how far I still have to go. I’ve lost 15 pounds, but I want to lose 15 more. I’m boxing every other day, but I want to be going every day. I have two very developed abs and two half developed ones, but I want a six pack.

If you are a very goal-oriented person, like I am, it is easy to focus on the next goal and forget to be proud of what you’ve already accomplished. Awards like the one I won tonight make it easy to remember that I’ve done a lot!

But you don’t need an award to celebrate what you’ve done. You just need to change the way you think. Since I was a child, my dad has sworn by what he calls the “Disney World Line Theory of Life.” He tells me not to focus on how far you yet have to go, but instead to look back and see how far you’ve come. Everyone could benefit from looking back every so often.

Take the time to look behind you in line. Think about what you’ve accomplished and celebrate it! Be proud of who you are and what you’ve done. 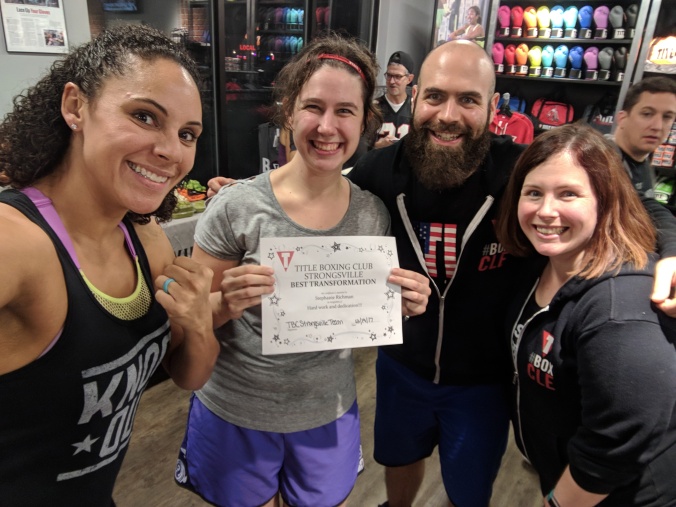 (Me after the workout with three of my favorite boxing coaches!)